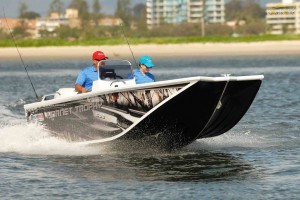 DISLIKES
Anti splash surround in the life fish tank would save ‘fishy’ water sloshing out onto surrounding carpet. Perhaps this lip around the edge could be moulded in the process of the tank build.

OVERVIEW
– A new version of and old favourite
Quintrex are soon to be moving this new model throughout their dealerships around Australia and our prediction is that this will not take a lot of effort.

The Hornet’s reputation has been, and still is, exemplary which, given that production-line models of aluminium boats tend to fall off the radar relatively quickly compared with fibreglass builds is, in this day and age, is a commercial feat.

The Hornet series has been on the boating scene in one form or another for at least seven years and the latest top dressing will launch it into the next seven. The design tag for the hull of all Hornet boats is now termed ‘Extreme’.

PRICE AND EQUIPMENT
– Too early to tell
The Hornet has never been a cheap boat. It’s in the arena dominated by craft purposely designed primarily to cater for fishing disciplines that encompass the iconic species bass, barra and bream. There is some stiff competition in those specialist fields and especially so these days when those in the market place are internet savvy and there is any amount of super cheap craft available on the overseas market.

The paint on the hull was still drying when we reviewed this first new model Hornet off the production line and try as we did we could not get a handle on the retail price that could be expected. Once Quintrex’s dealer network has been consulted and potential numbers sorted out, pricing will be worked out from there. We’ll keep you posted.

The Hornet comes with all the necessary features to get one started without any major structural upgrade. One of the two bow points is plated to receive the base of an electric motor and a pair of batteries may be installed on the standard fit trays under the foredeck. A plumbed live well is standard and installed in the rear casting deck and a Lowrance 5X depth sounder is included in the price.

Seemingly the sky is the limit when it comes to what options are available at factory level with choices across the board for any sort of accessory related to sportfishing. One of the options is hydraulic steering but as we found, the mechanical system worked without undue torque causing stress to the skipper.

LAYOUT AND ACCOMMODATION
– Plenty of sensible stowage for the avid angler
The aft end of the new-series Hornet remains ostensibly unchanged from the previous model. Its rear casting platform is timber clad and sits about 80mm below the side coamings. A hand rail provides the barrier on each side of the engine well at the aft of the platform to prevent anyone from accidently sliding overboard. As with the remainder of the decking it is marine grade timber topped with quality marine carpet.

Three flush-mounted hatches are installed in the rear deck. The central compartment is a plumbed live-fish tank made of a rotaform insert. Tournament boats require a minimum tank capacity of 60 litres for competition and this tank just scrapes it in.

On the starboard side, the cranking battery, isolation switch and engine oil reservoir are installed; while in the opposite corner the flat floor in the compartment will allow gear to be stored up out of bilge water.

The two supplied seats have a number of post positions including one on the forward casting deck. This is the usual place for a raised pedestal bum seat used for leaning against when standing and casting to fish; and those are an option.

The console to starboard is stylish in design and while but a mere shell, its form ensures rigidity. It was good to note more top space for mounting large cabinet electronics; something we found wanting when we tested a Hornet a couple of years back.

A sealed compartment was recessed into the console and provided a good place for car keys and mobile phones and a raised grab rail at the front of the console was clad in part with a tinted screen which acts as a wind deflector.

Evinrude ETEC instrumentation was installed along with Lowrance’s HDS7.

Moving forward to the front casting platform we found a lot of changes from the models of old.

The port side bow point has the addition of a mounting plact for an electric motor. The power supply for that may be strapped down in the purpose-built compartment aft of the large anchor well. Two aluminium trays come standard for that purpose.

The anchor well is constructed of a rotaform insert which takes a lot of the rattle and banging out of having ground tackle stowed there.

Across the aft of the platform three hatches open to the one compartment which is huge. It too has a carpeted floor raised off the bilge and with so many compartments in which to stow gear, little wonder the manufacturer didn’t bother with cockpit side pockets; rather the cockpit is neat and uncluttered.

MECHANICAL AND HULL
– New shape means better planing and more stability
The fitted 115 hp ETEC was the maximum recommended for this rig and it performed brilliantly. All Hornets from this point onwards will feature 4mm bottom sides and transom and 3mm top sides.

As mentioned, steering was mechanical and worked well with the normal amount of torque experienced at the helm when turning with the motor not trimmed as it should be.

Gone are the pressed ribs with the manufacturer opting for a flat sheet finish which really makes a good base for any of the wraps that are available; theirs or one of your own design.

The bow shape has been changed to one that now has two bow points rather than the typical one and each represents the end of the now extended and raking chines that come well forward putting more forequarter in the water. This results in more planing surface hence quicker hole shot, but importantly greater stability in the fore end which can only be of beneficial to the standing angler. 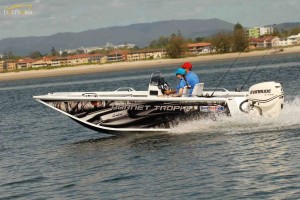 ON THE WATER
– Certainly not disappointing
We expected big things out of this Hornet and were not disappointed. Stability was excellent and noticeably improved when moving around on the larger foredeck compared with earlier models. Hole shot was stunning and the Evinrude had plenty of grunt throughout the throttle range.

With so much planing area on the hull it was difficult to ascertain exactly when hole shot had occurred but the hull seemed to level itself at 10 knots with the engine running at 2400rpm and using nine litres per hour. Cruising at 20 knots it was using 17.6 lph at 3500rpm and WOT running at 5800rpm 37 knots was achieved for a fuel burn of 48 lph.

The wide forequarters definitely retard a lot more spray than the single-point hull on earlier models and hard turning at speed was direct with little side slip. Provided correct trim was set, there was no aeration at the propeller.

Quintrex continues to be on a winner with this Hornet Trophy. It is everything the avid sport fisher would want in a boat for sheltered and partially-smooth waters. The finish is excellent and overall the boat presents as one that has been custom built rather than one that has come out of one of the biggest production line facilites in the Southern Hemisphere.

Full marks go to this one!